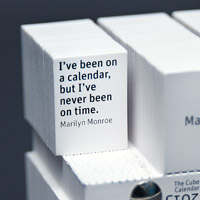 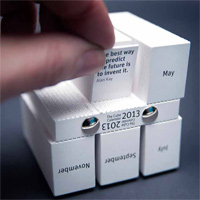 Philip Stroomberg on The Cube Calendar

Philip Stroomberg’s design of The Cube Calendar adds an innovative twist to the concept of the tear-off calendar. ‘Its shape results from deliberations about time.’

Every now and then The Cube Calendar reveals a card with a quote – from writers, film stars, politicians, Johan Cruijff. All quotes are about the experience and passing of time, some poetic – ‘Forever is composed of nows’ (Emily Dickinson) – others more practical, to remember for later use. For instance, ‘Only Robinson Crusoe had everything done by Friday.’ Stroomberg: ‘When you start paying attention, you find quotes about full diaries or wasting time all over the place. When creating my selection, I wasn’t necessarily looking to make you burst out laughing, a smile is just as good. What’s important is that the quotations move you.’

Many of Stroomberg’s designs require some imagination from their users. Earlier, he produced a quirky calendar with reflections on time that temporarily put the user on the wrong track. For a literary event of the Dutch Foundation for Literature in London, Stroomberg produced a brochure shaped like a calendar that contained only the days featuring activities of the Foundation. Quite logical, really, but simultaneously a little alienating to find the other days are ‘missing’.

Stroomberg: ‘I’m not a classical typographer. To me, the interaction with the design is important. I’m always looking for a shape on the basis of the content. The shape is the result of an idea, it isn’t based on established lines. I want to create it in such a way that the user develops a bond with the object.’

The Cube Calendar’s design is sober, with no fancy colours and frills. Which emphasises the means that have been used, i.e. the font and the black. ‘If you only have black, the black has to be right’ is how Stroomberg defines his task. It took considerable effort, therefore, to find the right typeface. Stroomberg: ‘The font I chose, Unit Rounded, is a design of Christian Schwartz and Erik Spiekermann (FontFont) from 2003, but I used Erik van Blokland’s 2008 adapted version. It’s a contemporary typeface with a certain softness to it. The Cube may be robust but, because the cards have been punched, the corners are slightly rounded, corresponding with the curvature of the letters. The font is clearly legible in a small size – important for the quotes on the cards. Also, the numbers had to look good. The 1 has a nice little foot, while the 3 and 5, for instance, stretch a little below the base line. Somewhat classical, but with a personal interpretation, that’s what appeals to me.’

Philip Stroomberg is an independent graphic designer based in Amsterdam, who started his company in 1997. In his portfolio, the accent is on cultural productions. Stroomberg regularly creates designs for the international promotion of Dutch culture.
See also: www.stroomberg.net